This list compiles the reading experiences I treasured most this year. 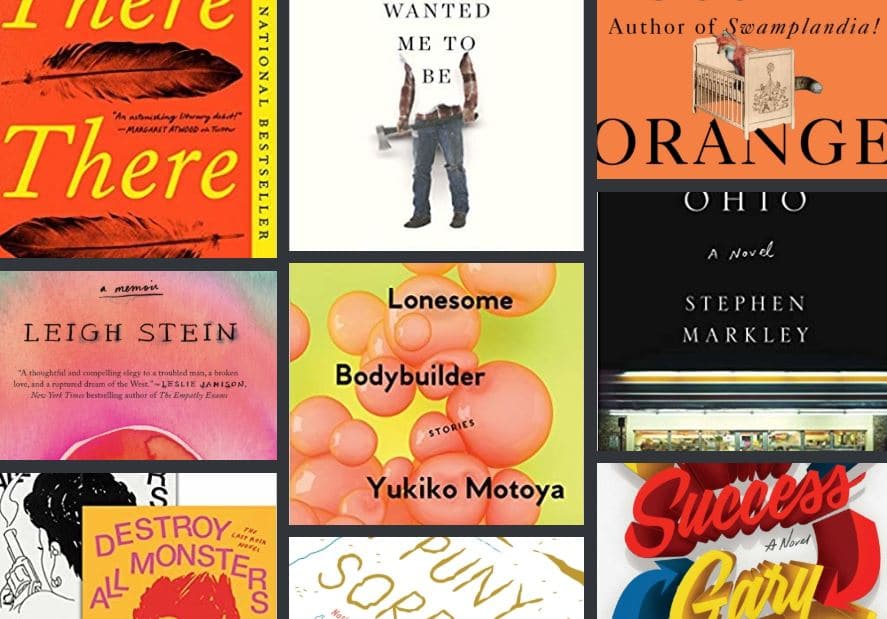 Typical year-end lists come with the unspoken qualifier that they exist to highlight things made in a certain calendar year. My approach here is a little different. I try to keep up with the latest and greatest – so many selections are new. But its impossible to consume everything worth reading in its first calendar year.

So this is a compendium of the books that I read this year (regardless of their release date) that left me laughing, thinking, rattled or just impressed.

Jackson takes the idea of making a novel “rock n roll” to the extreme – he literally gives the physical book an “a-side” and a “b-side.” To read them both, you actually have to flip it over.

The story is dark and uncomfortable. The characters are lost, sad and scared.

But there is a hopefulness in Jackson’s creativity. In a time where some are refusing to even bother printing a physical manifestation of a manuscript, he has made holding the story PART of the story.

Shteyngart somehow weaves together the Trump election, wristwatch obsession and The Wire with thread made of F. Scott Fitzgerald – both literal and implied. The story somehow simultaneously sympathizes with and condemns the utter shock of the rich, white male protagonist when things stop working out for him.

There is a lot to unpack here and Shteyngart is masterful in the way he slowly reveals where he is taking you.

And be forewarned: after reading this book, I became very interested in wearing a watch.

Motoya writes the kind of short stories that you know you will be re-reading before you even finish the first time. Injecting fantastical elements and outlandish plots to make the reader re-examine basic ideas is an art form and Motoya makes it look easy. “Typhoon” quickly made it on my all-time favorite short story list, alongside stuff from masters like George Saunders and Karen Russell.

There There – Tommy Orange

Orange’s real accomplishment here is in writing a book that not only educates but is somehow insanely readable while still being gut-punchingly uncomfortable and bleak. A work of fiction that pushes you to read non-fiction (This book is a gateway drug to things like Empire of the Summer Moon and Killers of the Flower Moon) is something that should always be celebrated.

A faux rock and roll oral history that strikes eerily close to the reality of a certain 70’s super-group? This is the actual recipe to making me specifically happy. As soon as this came out, I knew there was no way it wouldn’t smother me with its affections.

In lesser hands, this could have ended up schmaltzy and embarrassing. Instead, it’s the book that everyone I know has read this year and it makes for a lot of fun conversations.

I ran across a mention of this book while reading an article about how book deals are made. (Weird, I know.) But one Google search about it had me intrigued and I knocked it out over a traveling weekend. It’s crushing and beautiful exploration of the early relationships that make us all crazy and leave us destined to be looking for the wrong things for too long.

The Man They Wanted Me To Be: Toxic Masculinity and a Crisis of Our Own Making – Jared Yates Sexton

This is the book I have talked about and recommended the most this year. It’s another example (like the one above) of one person being willing to excavate their darkest moments for the benefit of those facing the same monsters. Sexton and I are almost the same age and grew up within a few hours of each other, so there is definitely something to be said about how closely this resonates with my own life experience. But the questions he raises are so timely and important, it’s hard to overstate its relevance. I could see this being taught as part of an examination of #METOO and the Trump era in future American classrooms.

If you heard my episode of What Should I Read Next, you know my favorite type of book is the sprawling family/friends drama that unfolds over several decades. So I read a ton of those this year – Little Fires Everywhere, The Last Romantics, The Dutch House, Ask Again Yes – but when considering which one to include here, Ohio is the one I found still stuck to the roof of my reading mouth. Markley’s vision of late ‘90s-early 2000’s Midwest is bleaker and grayer than Celeste Ng’s, the characters feeling like they might have graduated a few underfunded school districts away from Shaker Heights. But the individuals encountered are developed enough to be just as captivating as the mystery that bubbles below the surface of their shared existence.

Russell’s latest collection is weird as ever and has shown more staying power within my psyche than even her excellent Vampires in the Lemon Grove. “The Tornado Auction” in this collection may not top “Reeling for the Empire” on my list of favorites from her, but it gets very close. Her ability to be both prescient and bizarre is remarkable.

All My Puny Sorrows – Miriam Toews

While a lot of readers this year gushed over Toews’ latest – Women Talking – I chose to return to her 2014 masterpiece to see if it would still bowl me over several years since my first encounter. And it did. There is something about the honesty and elegance with which she is able to examine depression and suicide that is just beautiful and heartbreaking all at once. This has maintained its place as a Top 5 of All Time for me.